Would it be worse to be called a racist or a thug?

Is it fair to call all white people racists?

Do you think it's fair to call all Black people thugs?

Lately, there has been an overabundance of “thugs” being shot and killed by police officers (and wanna-be cops). On any given day, you can read a news article or visit YouTube and see a multitude of articles about police officers shooting and killing unarmed Black people. When questioned why, they answer that they feared for their lives. They thought they saw a weapon. If they go to court, they never serve a day behind bars because a jury of their peers will find them not guilty. Everything about our justice system is fucked up. It truly hurts my heart that someone gunning down an unarmed Black person is justified because the label “thug” is used.

Recently, Justin Beiber was arrested for a slew of random and stupid acts in which he participated. From egging someone’s house to drag racing in his Ferrari, JB has been diving off the deep end. Instead of being called a “thug,” he was labeled “misguided,” “juvenile,” and “acting out.” The kid is 19 years old. He knows better. Now, let’s flip the script to Richard Sherman. Richard Sherman, an NFL player for the Seattle Seahawks, had recently made headlines for his “outburst” after a close win over the San Francisco 49ers. Just minutes after the win, he was interviewed and was clearly emotional about the win over his opponent, Crabtree. Allowing his emotions to take over, Sherman yelled into the microphone that Crabtree was “sorry” and proclaimed that he was the best defensive player in the NFL (or something along those lines… I don’t watch football). The interviewer, a petite white woman who was obviously caught off guard by Sherman’s words and emotions, appeared a bit nervous on camera. Minutes later, people flocked to their social media accounts to call Sherman every type of uneducated, arrogant thug and/or nigger who scared the little blond interviewer. Sherman, however, graduated from Stanford with his Master’s degree. He is not uneducated nor is he some scary thug off of the street. Wouldn’t you be excited just seconds after making it to the Super Bowl?

This is an example of the discrepancies between how Black people and others are treated. In the media, when a Black male is shot and killed, his murder is justified by the possibility that he may have been a thug. “Thug” has become synonymous with “nigger” and/or “Black male.” A perfect example is in the picture below. Here’s what a Facebook user had to say about Avonte Oquendo, a teenager with autism who was found dead after drowning in Queen’s beach: 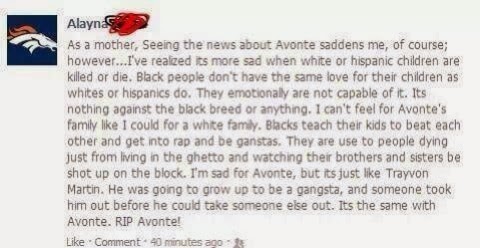 This type of shit infuriates me. As much as I would love to slap the spit out of this person’s mouth, I have come to realize that this is how much of the world views Black people, especially males. I fear having children because I’d become a monster worse than Jigsaw if my child was murdered by a law enforcement officer and people tried to justify it by calling him a thug or soon-to-be thug on the Internet.
Even before the Trayvon Martin/George Zimmerman trial, people were claiming that Trayvon was a thug. They delighted every time some news report found some type of evidence pointing to Trayvon being a weed-smoking, violent teen who was rapidly heading in the direction of criminality. In their heads, this was enough evidence to prove that he deserved to die. Apparently, the jury agreed.

For this reason, I can’t wait to become a full-time teacher. I want to change the world in so many ways, starting with education. I really want students to value themselves higher than the portrayals on the television. Rarely do students see Black people in a great light. They are always on the news being arrested, on BET acting ignorant, or eliminated altogether. Clearly, many teachers are only preparing them for the school-to-prison pipeline. I want students to know that they are more than just a statistic. They are more than another Black person who may go to prison or killed. They are the epitome of greatness.