A year or two ago, Wyclef Jean made a statement about women who carry condoms being trashy. A few minutes ago, a tweeter with the name of CheyB tweeted about women who carried condoms needing to re-evaluate the men with whom they were sleeping. Hmmm... From Wyclef to this relationship “expert,” it seems like some men have issues with women wanting to protect themselves. Sadly, up until a few years ago, I would have probably agreed with them. I didn't want to step foot into an adult store, or even let anyone know that I was going to the doctor to refill my birth control. Oh, how times have changed. I'd rather go to “A Touch of Romance” to get condoms anyway. They're cheaper, more colorful, and have so much variety. Lol. 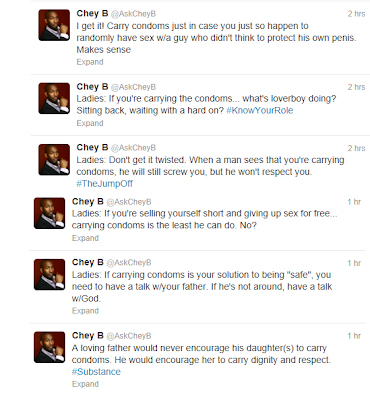 Back to the topic. What is the problem with women wanting to protect herself? If you don't look out for yourself, then no one will. Carrying condoms says plenty about me: If I want to get it in, I'm gonna be safe; I'm prepared; I don't want to get an STD/HIV/AIDS. Then this clown tweets, “A loving father would never encourage his daughter(s) to carry condoms.” I'm sorry, but my dad has always taught me to be independent, smart and make good decisions, all of which include carrying condoms in case of anything. And my dad was not the “traditional” dad. We can have conversations about sex without him judging or criticizing me. Good parenting means equipping your children with knowledge of resources even if they fall outside of your own beliefs so that they aren't ignorant in the real world. He goes on to call women who carry condoms “jump-offs” and “hoes.” That's where you're wrong, sir. Women who carry condoms are women who are prepared, safe, and aware.

I feel sorry for women who read his tweets and feel ashamed of their sexual history. I'd rather be a woman who is prepared than a woman who depends on a man to protect her and/or be equipped. These socially-constructed behaviors deemed acceptable by insecure relationship “experts” disgust me. Thank goodness I was raised differently. Lol.