Yesterday, I read an amazing article by David J. Leonard, entitled “The Unbearable Invisibility of WhiteMasculinity: Innocence In the Age of White Male Mass Shootings.” The article was about the different ways in which the media portrays killers and murderers. Leonard discusses how, when the suspect is not a minority (aka white), they are portrayed as the quiet good kid who just happened to snap. They try to break down the possible reasons why he/she could have committed such a heinous crime. However, if the suspect is a minority (Black or Hispanic), they are quickly labeled crazy or monstrous, without any questions asked. They don't take into account their living situation, financial issues, academic background, or anything else. When the Newtown shooting
occurred, citizens were given damn-near Adam Lanza's entire life story. 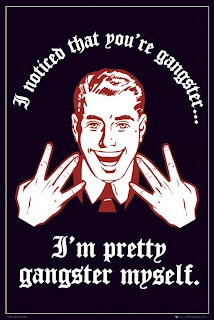 After reading the article, I scrolled through the comments section. Many of the comments claimed that Leonard suffered from “self-hate” and “white guilt” and was too liberal. Some bolder commenters claimed that he, along with others, should stop feeling sorry for Black people (as “Blacks” have access to education now). Some blamed affirmative action for giving “genetically inferiors” (yes, someone said that) access to the same opportunities as their White counterparts. Some wrote out long drawn out explanations for why Leonard was wrong, and should stop spewing his “liberal agenda” on Gawker. However, there were some commenters who agreed with Leonard and gave him an e-applause for at least awknowledging his White privilege.

Whenever I read articles like this, I tend to torture myself by reading the comments section. As a future educator, I try to understand the various points of view so I can be more open-minded. However, it never fails that I see people who speak (type) pure ignorance. I bet that the same ignorant people who hide behind computers and keyboards are the same ones who will turn mute if confronted on the street. I just don't get it. Instead of pointing to proven facts to establish their point, they turn to ignorant shit like racist remarks. These are the same people that I hope get out in public and spew that racist bullshit to the wrong person and gets a rude ass awakening.