I was watching “Lock Up” on MSNBC over the weekend. They were covering Los Angeles' Men's Central Jail. In watching this show alone, I found so many things wrong with the prison system, but my main concern was the way that inmates were treated. 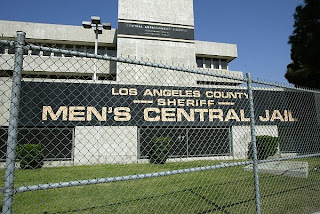 There were so many inmates in jail drug usage. That's baffling because instead of directing them to a rehabilitation center, the system places them in jail. First of all, drug addiction should not be a crime. Why? Two reasons—it's harm that you are causing to yourself and addicts need help, not punishment. If using drugs is a crime, shouldn't drinking be also? They both alter your mind; they are both addicting; they both can lead to dangerous actions. Addicts, once released from prison, have a greater chance of being back on the streets getting back on drugs. They may even find more creative ways not to get caught.

Mentally-challenged people were treated unfairly also. Firstly, one of the correctional officers found it funny that one of the inmates suffering from paranoia and schizophrenia was having outbursts in his cell, which is blatantly disrespectful. Those suffering from mental disabilities were isolated and put in their own rooms where they are free to throw feces, yell at themselves, and so on. They may be given medicine, but in general, they are not given help. Once they serve their time, they are released into society, left to fend for themselves by whatever means they are able. Why aren't they sent to a legitimate mental health facility where professionals can give them proper care? Is the state trying to save money by doubling the duties of correctional officers? They aren't licensed therapists or specialists in that field! And it's sickening that the state gets paid for each prisoner when most of these so-called inmates shouldn't be in jail.

Women inmates are also amongst the groups being treated badly. One of the inmates says that they get “threatened for everything.” This isn't the first time I've heard this. I was told that rather than get spoken to in a manner than shows that they are equally as human as their correctional officers, inmates get yelled at simply for misunderstanding a set of directions.


One of the things that people fail to realize is that not everyone in jail deserves to be there. Between the “Three Strikes Law,” unconcealed racial profiling and unjust judicial system, picking a flower off a tree can land you in jail. Even if someone did something wrong to be put in jail, it doesn't make them any less human. Compassion is definitely lacking in the judicial system.