Where Are My Panties?

No matter how old an album gets, if I can still groove to it, I'm gonna dance to it. Lately, I’ve been listening to Groove Theory, TLC, and D’Angelo, but “The Love Below” by Outkast has always been my shit! Andre 3000 is amazing. Ever since SpeakerBoxxx/TLB was released, I have always loved the “Where are my panties?” interlude. It explores the topic of first date sex, female sexuality and the awkward morning after. 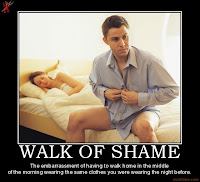 We have all had to do the dreaded “walk of shame.” For those unfamiliar, the walk of shame is the next morning when you’re leaving a guy’s/girl’s house with your panties in your purse and heels in your hands, hoping no one you know spots you. In reading, writing and growing while running PBK, I’ve transitioned from frowning upon those who have first-date sex to somewhat admiring them. Though I’ve never engaged in first-date sex, I have had sex before the “appropriate” getting-to-know-you stage in a relationship. I admire those who are able to do so because I talk a big game, but I’d honestly be too scared and a little insecure to admit that I want to have sex with someone.

The “Where are my panties?” interlude is hilarious because the girl is afraid that he’s going to think she’s a hoe, but she can still admit that the sex was good. Meanwhile, he’s not caring about any of that. In fact, he actually admires her for knowing what she wants. Lol. Then, at the end of the skit, he asks himself, “What if she’s the one?” A woman can still be “the one” even without being chaste.

I asked my Facebook friends, “How soon is ‘too soon’ to have sex with someone?” To my surprise, two guys answered. One replied, “Before you know their last name is too soon.” Another one said, “The introduction stage.” Though that may be too soon for some, what if they don’t care what your last name may be? What if they just want to nut and sleep without any type of commitment? Is that too much to ask?