If You Can't Say Anything Nice...

One of my favorite shows is “Beyond Scared Straight.” It's not solely because I like to see adolescents and teenagers on the verge of pissing their pants after being yelled at by Diabla, but I like to know what led up to this behavior. In many of the episodes I have watched, the parents were either too lenient on the kids or had very strict rules that the kids didn't want to follow. As a person who is rumored not to have emotions, people may find it surprising that it actually does sadden me when parents are harsh on their children.

Two days ago, I had to deal with a friend of my SO's letting his bratty ass daughter tornado through our apartment. His excuse for not reprimanding her: “She's gonna cry.” How the hell are you afraid to discipline your child?? After that day, my SO and I decided not to allow his child back into our apartment that we work hard to keep clean. First of all, it's a nuisance to have to baby-proof our apartment when she comes over and we don't even have children of our own. WTF? Secondly, be a gotdamn parent! Your child needs to learn good and bad behavior before “Beyond Scared Straight” will have to teach her. That may be an exaggeration, but leniency can lead up to behavioral issues in the long run.
However, at the other end of the spectrum, there are parents who are too harsh on their kids. Last night, I was parking my car and spotted a mother putting her young son in the car. Mind you, her son looked to be about four years of age. As I got out of my car, I heard her yelling at her son, “Motha fucka', stop actin' crazy!” Wow. My own mother never talked to me like that even was of age to get cussed out. It's a respect thing. I am a firm believer in respecting your children in order to receive it in return. I'm not saying that children should disrespect their parents in any circumstances, but it should be an unwritten rule that respect should be reciprocated in parent-child relationships. 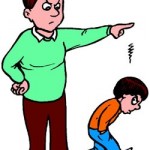 I don't understand why parents talked to their children like they aren't shit. When parents constantly tell their children “you ain't shit” or “you're just like your no-good ass daddy,” that shit hurts. It penetrates into their mind and they really start to believe it. Then they either overcome it or they set out to prove just how ain't-shit they can be. More than likely, it's the latter. As small as the gestures of hugging a child or praising their accomplishments are, they help mold and inspire children to do their best in life. Children already have difficulty fitting in, dealing with acne, body image, puberty and God knows what else kids deal with these days. Parents should at least be their comfort away from all of that. When parents spout negativity into their child's ear, the universe picks it up and makes it a reality. You may or may not believe that, but I do. If you can't say anything nice (or uplifting) at all, shut the entire fk up. This universal rule does not exclude parents.
Love, Peace & Phoenix.
Created by Ms. B. at 10:07 AM