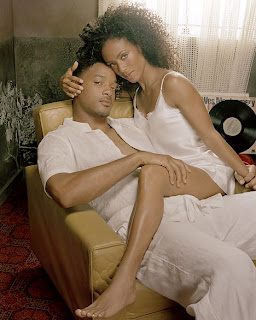 Today, the internet went ape shit with rumors of Will and Jada splitting up. For many, the idea of a perfect lasting love went right down the drain. For others, the news was the perfect opportunity to throw salt in the wounds of those in despair. They stated, “Will and Jada have an open relationship. What's so ideal about that?” or “Weren't they swingers?” as if that made their possible divorce less worthy of sympathy.
Personally, open relationships are not for me. However, I do admire the Smiths for being honest in their relationship. In an interview with Necole Bitchie, Jada says, “We always have people that we’re attracted to that we talk about. That don’t stop just because your married.” I'd admittedly be pissed off if my husband/boyfriend told me that he was attracted to another woman and wanted to sleep with her, but at least he was honest. Would we break up if he told me he was attracted to her? No. Would we break up if he slept with her? Yes. I'm too selfish to have an open relationship, but then again, my significant other isn't in the media 24/7 and surrounded by super models and blemish & bruise-free actresses all day. That's just me, though. *shrug*
While I could really care less whether Will and Jada divorce or not (they aren't, FYI), I found it interesting that people would put down their relationship because of their own personal preferences. Will and Jada have been married for 13 years, and regardless if they're “swingers” or not, for many, they have managed to set the bar for successful black marriages in Hollywood.
How do you feel about open relationships?
♥P.
Created by Ms. B. at 3:57 PM