I want another tattoo. With my tattoos, I think I'm somewhat OCD. I have 3 on the left side of my body and 2 on the right side of my body. I want my next tat to be a small (3 centimeters or so) Celtic cross on my right wrist. When I told my mother (who happens to have 8 tattoos) my idea, she tried to discourage me. She stated me eventually getting a "real" job in the future as a reason why I shouldn't get it. She doesn't realize that I am a MANAGER at a daycare. I set my own schedule and I get paid more than I did working at a "real" job. Also, I can always cover up my 3-centimeter wrist tattoo with jewelry or make-up.

When I told my dad, he shrugged and said he didn't mind. His idea is definitely different than my mom's. He wants me to run his business soon so it doesn't matter how many tattoos I have.
Either way, I got to thinking: even though tattoos are more acceptable in society, are they still taboo in the workplace?

Yeah, tattoos are more mainstream, but many companies have added body art restrictions in their dress codes, claiming that they are a distraction and unprofessional. To who? What grown ass people are really going to hover around someone's work desk sharing tattoo stories? Don't judge a book by its cover. The amount of color on one's skin does not determine their intelligence level. Having a tattoo does not mean that you are more likely to have a low IQ, rob a bank or be a thug. I will admit that tattoos must be tasteful and non-offensive to be accepted in many corporations, but I don't agree with restricting them all. 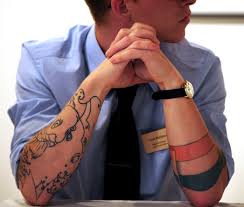 I wish people would stop trying to justify these excuses and reasons why tattoos are "disgusting," "unprofessional," or "uncreative." Personally, I'd prefer "unconventional" doctors or lawyers with a little bit of ink just because they go against the grain of what society expects of them--to be sticklers with no personality. Uh-uh. Me no likey.

Fuck society's expectations. I do what I want. I'm getting my tattoo. If I have to cover it up with jewelry or make-up, then so be it. I'm hard-headed, but I'm definitely not stupid. Nowhere in my ink is that written.