Bitch is the New Black 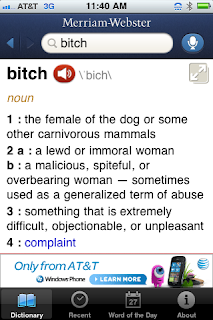 The second and third definitions for “bitch” refer to a type of woman. Why can a bitch not be a man? Women get called bitches all the time, usually, just for speaking their minds or being opinionated. Hell, some of you probably think I'm a bitch sometimes when I go on my little rants.

Even so, why are people nowadays using the word “bitch” as an interchangeable word for a woman? I was told that it depends on a person's upbringing. If calling/being called a bitch is acceptable, they're just going to do it. Understandable, but WHY is it acceptable in the first place? After a long debate via Twitter and over the phone, I have to realize that I will never understand. However, I did learn the four key reasons guys call females bitches from two guys with whom I engaged in argument/friendly aggressive debate yesterday:

I do not agree, but that’s just me. You may agree with them or me, but here are my rebuttals:


Guys will call a female a bitch if she is “acting like such.”
P: It doesn’t matter how she is acting. If a guy is mature enough, he should still respect her. One of the guys says that the female should respect herself first in order to gain respect. It does not matter. If your mother was acting like a bitch, she shouldn’t be called one regardless. Take initiative and show respect in any way.
Guys won’t call their own female a bitch unless she likes it.
P: Some girls are kinky and like being talked to roughly. If it is her own way of foreplay, then so be it. However, if she introduces herself as “Mary Joe Snider,” then that is her name. During sex, go for it.
Guys believe it is okay to call a female a bitch if she calls herself it.
P: It doesn’t matter if she says that she is a “bad bitch,” she still deserves the respect of being called her own name unless she walks up to you and says, “Hi. My name is Bitchy McBitch Bitch.” Just like some guys call each other “nigga,” they wouldn’t want a white person walking up to them calling them a “nigga” just because they call themselves that, right?
Guys believe it is okay to call a female a bitch if she calls him out of his name.
P: I’m not playing a double standard. Just as a male should respect a female, she should respect him. However, if she calls him a “dirty dick, roach-infested, mud-encrusted bowling ball-headed nigga,” he should still walk away and be the bigger person. Walking away is never a sign of weakness. It’s a sign of maturity. Although most guys I know find it difficult to hold their tongue, they still should.
No, I’m not going in on the guys at all. I still feel like ladies should act respectful and lady-like at all times. Even if they don’t, they still at least deserve a thread of dignity to be called their name. As for the guys who use “bitch” just like they would use “woman,” that’s messed up. Women just don’t point at some random guy on the street like “Look at that cute nigga over there.” So why say, “Oh, that’s a bomb bitch”? It’s disrespectful.