Over the years, being a woman, I’ve learned that women are best described as Omar Gooding’s character in “Baby Boy” stated: unstable creatures. They want a wholesome man, but he also has to have thuggish ways. He has to be respectful, but has to have a little gutter in him. They want him to be 6-foot something with an athletic body, but not a typical jock attitude. He has to know he’s attractive, but not cocky or conceited. He has to be attractive, but not so much that he’s outshining you. We are very picky. We have a right to have standards, but sometimes, I’ll admit, they are a little over-bearing.

I’ve also realized that some women, like men, find it very difficult to accept defeat, especially when it comes to courting. Some women will go after a guy who has a girlfriend simply for the thrill of the chase. There’s something about chasing someone we cannot have that entices us. Last year, one of my best friends caught her boyfriend of four years cheating. The mistress knew that he was in a relationship when she was with him. After trying to figure out a motive for so long, I finally told her, “Women like when a guy does not like, love or what to be with his girlfriend.” My other best friend added, “It gives them hope.” After pondering on why he had did that to her for so long, my best friend finally understood. In no way am I condoning the thought process of some women. I am simply stating a fact.

Back in my high school days, I would’ve accepted being girlfriend #2 and laughing at the girl whose man hit on me behind her back. My immature saying was, “Don’t hate me because I’m beautiful. Hate me because your man thinks so.” I know, classy of me, right? However, I’ve grown up. Back then, I was acting like that to escape this title that followed me ever since elementary: NERD. To me, being a nerd was the ultimate turn off. I knew I was smart, but I also wanted to be seen as sexy. I knew I was attractive and could get almost any guy I wanted, but I felt like I needed YOUR man to verify it. 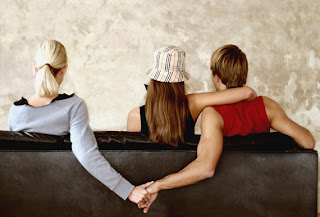 I knew the reason why I was felt like I needed that verification. Here are some other reasons:

She has low self-esteem
Women who have low self-esteem tend to always be competitive with other women to prove their rank. If they are better than that guy’s girlfriend, then her self-esteem goes up a bit.
She wants revenge
Someone left her in the past for someone who was prettier. After taking a hiatus to get herself together, she’s going on a rampage to get revenge. She could also be getting revenge on a girl who she disliked at some point.
The Violet Syndrome
She wants her way or no way. She’s like Violet from “Willy Wonka and the Chocolate Factory.” She wants your man. Not after you guys break up, but right now.
She’s just a bitch
She wants everyone else in the world to be miserable. She really doesn’t want him. She just wants to see what you will do—either fight her or be heartbroken. Either way, she’s gotten under your skin, which makes her life better.
Although I was a nerd and a bit spoiled, I knew what I was doing was wrong. I just felt like being bitchy. Back then, I didn’t care. It was high school and I had nothing better to do at the time than study and steal girls’ man. *shrug* Once I got out of my little stage in 11th grade, and switched schools, karma came back in 12th grade and hit me so hard. I knew it would. Now that I’m older, educated and have grown up, I really hate seeing girls my age act in this manner. The pleasure that they get from hearing that a guy doesn’t like or love his girlfriend is somewhat sickening. Yes, it gives them some type of validation, but they aren’t happy in the long run because karma is a bitch.