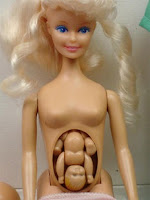 Today, I was on Facebook and found out that this girl from high school is pregnant. Almost everyone I know from high school have children except me. Her pregnancy shouldn't be a surprise to me because everyone has kids, but it is because of how she was in high school. She was the type of person who thought she was better than everyone. She was a "sadity" (or stuck up) cheerleader. Any guy who wanted to be with her had to be almost rich and reach damn-near unattainable standards.
Anyway, her status on Facebook read:
"Why does everyone keep congratulating me on being pregnant and then ask "ARE YOU MARRIED?" first off its really none of your damn business and second its 2011 how many ppl are really getting married before they have kids???? I'm sure its slim to none. Just know that I'm happy and as long as my baby has both parents married or not is all that matters. :)"

While I can understand her standpoint, I also feel like it was very ignorant. She's trying to justify her point by comparing it to the beliefs of society. Why is she justifying being a statistic? In high school, she prided herself on being better than everyone else. Now that she's assimilated to what society is doing by getting pregnant, she's trying to justify it? *side-eye*.

She asks, "How many people are really getting married before they have kids?" Plenty.... Myself included. It's up to you not to fit it. With all of technology that helps prevent pregnancy, she could have saved herself from this, but she made a choice to have a child. People have the choice to ask if she's married based on their beliefs or whatever. She could always ignore their questions or answer them proudly. However, she made the choice to address the situation and justify her actions. If she sees no problem with it, she shouldn't have to answer to anyone.

Having a child, or getting pregnant, is a choice. I have been with my boyfriend for almost 5 years, and not once have I ever gotten pregnant. I made the choice to use protection to prevent any unwanted pregnancies. Plan B, C, and D have already been decided before we even began getting intimate. Why? Because I don't want kids. I am not even the legal age to drink. I'll be 21 in 3.5 more months. I refuse to wait this long only to give that right up as soon as I get it. Every one of my former college friends always comment on how long my boyfriend and I have been together. Why is there a need to comment? They always say that they'd already expected us to be married with kids. I am in NO rush to get married or have children. We just got our own place in July of last year. While we're happy where we are, we are in no rush to take days off for doctor's appointments, postpone our schedules or shell out extra money for another human being.

My question is: "Why are you good enough to have his children, but not marry?" If he loves you enough, he should want to have you in his life for the rest of his life. It may not work out, but if it's only a piece of paper as people like to point out, why should you not give it a chance? Look at Lebron James' baby mama. She's been with him since high school and popped out two kids for him, yet he still won't marry her. Why? Tiny pushed out almost a half dozen of T.I.'s kids before she had to force him to get married.

There's nothing wrong with being his "sidekick" (as Lebron called his girlfriend) or his "old lady" (as T.I. called Tiny), but you should want more out of life. What do you think?