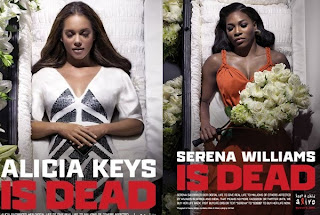 Honestly, I read about this charity event a few days ago. Not putting much thought into it, I didn’t really care. However, after it has been plastered everywhere, I have to say something. While I am all for charity, I still feel like this is ridiculous. Celebrities are “digitally dying” to raise $1 million. People like Alicia Keys, Serena Williams, Swizz Beats, Kim Kardashian, Justin Timberlake are not going to be on social networks until they raise the money. *insert side eye here.*
Alicia Keys, along with her husband Swizz Beats, and the rest of the participating celebrities ought to be ashamed of themselves. First of all, they are asking a country struggling to support themselves in a recession to donate money to help another country. Americans are losing their unemployment benefits and struggling to pay bills, but celebrities are asking them to help people in another country or else they will not go on their social networks . Who cares? Their presence on Twitter or Facebook is not solving anything. Blogs, newspapers, and tabloids will always announce what celebrities are doing so why do we care that the celebrities aren’t tweeting or updating their statuses? For them to “threaten” to not go on their social networks in “support” of a charity is very narcissistic. They want to know that people care enough to buy their lives back, but they fail to realize that they don’t even personally speak to their fans so it does not matter. Second of all, a celebrity’s presence on a social network is their way of self-promoting. If anything, it hurts their already-fat pockets.


Thirdly, celebrities may millions in endorsements, album sales, and other things into which they dabble. Why are they asking the average struggling person to support a cause in an underdeveloped country that they can buy ten times over? That is selfish. If they stopped buying Louboutin’s, Jimmy Choo’s, Alexander McQueen…etc for one week, they can give away millions from their pocket change. After all, if you think about it, they get almost everything for free anyway. They want us to struggle to “resurrect” their digital selves while we watch them fly to Europe, Russia, and other foreign places the average person will never go on a day’s notice?


Uh-uh. I’ll pass on this bullshit. I work hard for my money to support myself, and I’m not going to help these cheap ass celebrities keep theirs in their pockets.

*Side Note: I wonder how much they spent on these photoshoots and promotional videos? Hmmm....*
-Phoenix
Created by Ms. B. at 10:30 PM