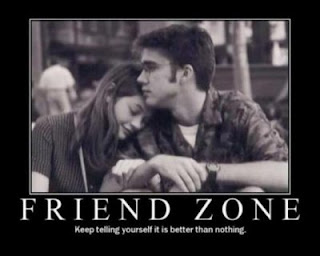 My generation tends to mess up everything! Lol. They messed up the music industry, the reputation of blacks, and most importantly the sanctity of friendship. Girls nowadays refer to guys who they've previously slept with or fooled around with their "play brother." Whenever guys hear that a girl has a "play brother," they automatically assume that they've sexed in the past.

For those unsure of the definition and correct terminology of a "play brother," a play brother is a guy who is close to a girl enough that they could be siblings. Unfortunately for those girls who actually never thought of their play brothers in that way, the term is now plagued.

I met my play brother Robert in my senior year of high school. He used to walk me home from school and we'd just talk. Usually, our therapy sessions only consisted of me soliciting his advice about one of the guys I liked. One of the main reasons why we had gotten so close is because I trusted him. He was the only person I knew at the time who knew almost everything about me and didn't judge me for the weird or dumb things I'd say. Though we walked home from school almost everyday that entire year, he had never stepped foot into my house and I never even knew where his apartment was located. Our walks were special to me because of the fact that he had never tried to get into my house nor had he ever hinted around. I never wanted anything more from him and vice versa.

That was 5 years ago. Though we don't talk as much anymore, I still consider him my brother. Whenever we talk on Facebook, I always refer to him as "brother" and he calls me "sis." Nevertheless, the terminology has definitely changed since then. If someone had heard me call him my play brother, they'd assume that we were more than that at some point.
Outspoken radio show host Steve Harvey says that women and men cannot be friends. In the video below, Harvey claims that women who think that men only see them as friends are dillusional. He says that men have ulterior motives when they jump into a "friendship" with a female.

While I will agree with some points, I disagree for the most part that women and men cannot be friends. If a man is simply waiting for the woman to let her guard down, but she doesn't see him in that way, the "friendship" will be over quickly. Once the male claims to have feelings, the woman generally begins to drift away in fear of leading that person on or the interactions becoming awkward. Also, if men become friends with women simply for the attraction, but she doesn't feel that way, then he's going to grow tired and irritated of waiting for her to reach that level of attraction for him and he's going to move on. Thus, ending the friendship or forcing him to stay in his position of "friend only." In other words, it takes two to tango. If the man sees the woman simply for physical attraction, but the woman doesn't, then it doesn't go further than friends anyway.
Personally, I think that everyone should have at least one friend of the opposite sex that can offer a non-biased alternative point of view. However, I also believe that people should choose their friends according to their goals. If a guy's objectives are mostly set on getting into women's panties or if they call women bitches and hoes, then obviously, they wouldn't make a good friend. If they are working towards something feasible and acceptable to your standards, then there's a better chance of them not trying to get into your panties because they're dead set on achieving their goals.
What are your thoughts?