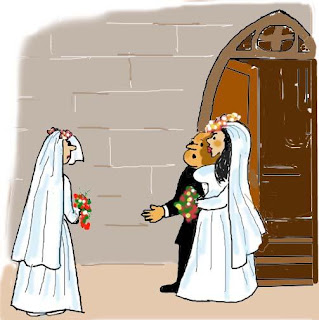 On Sunday, October 10th, 2010, an old acquaintance of mine (Let's call her "Melrose") had gotten married to her boyfriend (We'll call him "Brian"). I've known both of them since high school. However, I had met Brian when he was with another friend of ours, "Natalie." After Natalie and Brian had broken up in 10th grade, Melrose had gotten with Brian in 11th grade despite him being Natalie's ex-boyfriend from last year. In hanging out with the same circle of friends since freshman year, wouldn't Melrose have more respect for Natalie?

Many of you are probably thinking that it was high school and people break up all the time, but, in my eyes, Natalie and Melrose were friends and friends don't do that to each other.

I ended up switching schools in the middle of 11th grade, but, since my best friend still attended the school, I still got caught up on the latest gossip. After Melrose and Brian had gotten together, they were no longer friends, but most of the group had sided with Melrose because Natalie wasn't that attractive. What does that matter? So, let me get this straight. Since Natalie wasn't as pretty as Melrose, she wasn't allowed to feel betrayed because she deserved it?

I, having at least an ounce of morals, sided with Natalie. Natalie and I weren't best friends, but, to have someone who called themselves your friend date your ex-, is still a no-no. Female bonds are very rare in many cases because of catty-ness and other drama, and to be betrayed is damn-near normal. Therefore, Natalie needed at least one person on her side--even if I weren't at the school anymore.

If you can recall my QOTD regarding marrying a one-night stand, Melrose actually felt that it did not matter how one met their significant other as long as they did. To a certain extent, I agree. However, when you betray your friend to meet your significant other, karma steps in.

While on Facebook on Sunday, I noticed that many of the people who were members of our circle of friends were congratulating the happy couple on their walls. I'm definitely not one to rain on anyone's parade, but I'm also not going to praise betrayal. I wrote nothing. I have no ill will towards them personally, but I still feel that how they fell into a blissful coupledom is quite flawed.

Am I wrong for feeling this way?