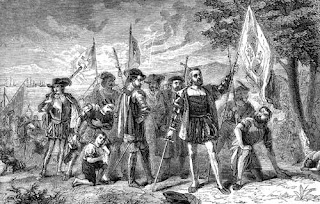 Today, October 11th, is "Christopher Columbus Day"-- a day that many of us Americans were taught that America was "discovered." How the hell does a person discover a country that was already inhibited by someone else?

Can I go to Canada, plant a tree there, and call it mine? No! What makes this any different? Christopher Columbus was nothing but an Italian criminal, whose journey of exploration was praised because the Native Americans were not seen as legit human beings. Otherwise, they'd have claim to America. In Italy, Columbus is seen as an example of historical revisionism. If you consider raping and killing people legendary, then sure. But to celebrate Columbus as innovative is a slap in the face to Native Americans, and teaches our youth that you don't have to work hard for glory, just take it from someone else.

It's equivalent to making a "Hitler Day" or "Jim Crow Day." 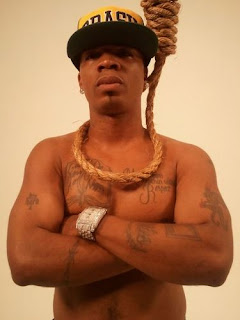 Speaking of ignorance, this idiot above is another example. Who prides themselves on being a slave? With all of these people trying to make light of slavery, it is an insult to those who went through it. Yes, we cannot allow it to bring us down nowadays, but damn, why must we glorify it? Plies' dumb ass is tattooed up with a big ass blinging watch on with a noose around his neck. Idiot, slaves were not on the plantation chillin' drinking lemonade while picking cotton in the sun.

We understand that it is a different time, but be more humble and celebrate that your future is brighter because of what our ancestors went through. Don't rub it in, asshole.