What the Fuckery: The City of Bell 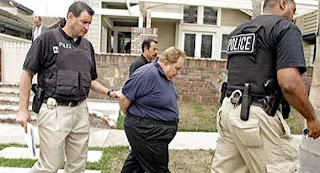 
Rizzo, 56, has been charged with 53 counts of misappropriation of public funds and conflict of interest. He is accused of writing his own employment contracts that were never approved by the City Council beginning in 2008. This fat bastard was getting paid $800,000 per year, and is set to earn about $1.9 million this year... On Monday it was reported that Bell spent nearly $95,000 to repay loans that Rizzo made to himself from his retirement accounts.

He should feel truly ashamed of himself (even though I doubt he does), because 1/6 of Bell residents are living in poverty, while he is getting morbidly obese from charging them almost $500 for towing their cars.
While I understand that it's a "recession," and everyone needs money, but this is out of control. I hope they had their little fun before they'll be working in prison for $100 a month...
Those bastards... smh.

Email ThisBlogThis!Share to TwitterShare to FacebookShare to Pinterest
Labels: What the Fuckery