Back in the day, rappers and entertainers were identified by their talent and skills rather than their physical appearance, although looks played a small part in the “complete package.” Big chains and extravagant bling weren’t a major priority. Instead, they just wanted a big enough fan base where they were known. Their way of standing out was how they wore their clothes—their style. Crazy hair, high-top shoes, and interesting accessories made their style popular. Back then, the average person could afford the same clothes as the entertainers because they were in the stores in your neighborhood. Entertainers, back then, were seemingly tangible. They were just regular people.

Performers nowadays are less talented, but more popular than previous entertainers. Not only do they do anything they can to separate themselves from the “average
person, but they boast about it. It’s in their lyrics and in their actions. They wear clothes that the average working-class person can not afford. They think it’s cool to have unnecessarily large chains and jewelry to prove how much their living standard has improved.

Personally, I think that these rappers and entertainers are ignorant and stupid. In the collage below, there’s Busta Rhymes, Sean Kingston, Rick Ross, Fat Joe, T-Pain, Yung Joc, Yung Berg, and Soulja Boy all showing off their extravagant chains. There is no reason for Busta Rhymes to have that many chains hanging off of his one neck. Not only is he saying that he has money, but he is saying that he has more money than you although you are supporting him. Sean Kingston, though not as big of a star than anyone else in the picture, has had a chain made in the shape of a crayon box. Why? I have no idea. At the bottom, there are three big ass unnecessary chains—a chain of Rick Ross, a chain that says “Big Ass Chain,” and one of a giant “H.” Why, Lord, why? Possibly, the stupidest people in the picture are Soulja Boy and Yung Berg. Yung Berg has rightfully gotten his chain(s) stolen about four times. After the first time, he should have realized that not only was it a dumb idea to walk around with a giant chain, but it was also dangerous. Soulja Boy is not necessarily stupid because of his chains (but for other reasons), but he is ignorant because he broadcasts how much money he has any chance he gets. 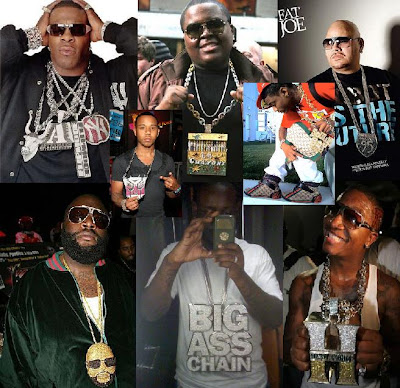 Attention rappers and such, we understand that you have money, but there are better things that you can do with your money than spend it wastefully. I know that you probably are in a better financial situation that you were a few years ago, and you probably would like to buy everything that you were never able to afford in the past, but DAMN! Going overboard will land you in the same predicament as MC Hammer.