Polygamy: So Many Questions, So Little Answers 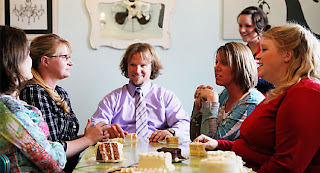 Last night, I was one of many who tuned in to the first episode of "Sister Wives" on TLC. "Sister Wives" examines the lives of Kody Brown and his three wives, Meri, Janelle, and Christine, and their 13 children. Though I did not get the chance to watch the full episode, I hear that Kody is adding one more wife, and her three children, to the mix. In watching the bit that I did see, I found myself wondering if I could survive a polygamist marriage.

Kody and Meri (the first wife) have been legally married for sixteen years, which is more than some monogamous relationships. That, in itself, says something. Janelle's and Christine's marriage to Kody is "spiritual." Kody, Meri, Janelle, and Christine all live in one house, but, the way it is built, allows each wife to have a separate house under one roof. (The house was actually built by a polygamist).

Anyway, each wife says that they have a healthy sexual relationship with Kody. Each wife has a separate schedule in which he takes them on a date. Therefore, each gets individual quality time with him. Each wife allows him to sleep with them whenever he wants, but the wives do not have sex with each other. That line never gets crossed.

While most reality shows on tv are dumb, I found myself wanting to watch more episodes of "Sister Wives" because I have so many questions:

How do you feel about polygamy?