Apparently, College Degrees Were Made For Assholes 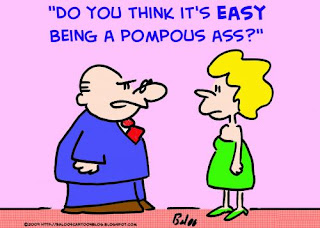 I love people. I'm not what many would call a "people person," but I like people. For this reason, I have always enjoyed working at restaurants. I mean, I don't wanna make a living as a server, but, even if I had gotten a "real job," I would still work part-time as a server/hostess simply because I enjoy working with customers.

Today, while as work, my love of people took a slight blow as I had to endure judging stares from middle-aged caucasian people who assumed they were better than me. I stand 5'3, but I am not easy to miss. I am the only black female there AND I have strawberry blonde hair. This family of six stood in front of me about to order food. As another member of their party joined them, I seemed to disapper as they exchanged pleasantries and continued to carry on their conversation as though they were never ordering food. After about two minutes, I guess I re-appeared and they decided to order their food. The last gentleman in their party wanted to order one of the Friday specials, but it expired when lunch ended although it was listed under "Nightly Specials." When I told him this, instead of just saying okay, he responded, "I went to college. It does not say that. It says it's a nightly special." In a calm voice, I said, "I did too, and you're correct, but we do not have that special right now."

After ordering about $60 worth of food, they did not tip. Though I would have preferred that they did, my issue is not about that. I have an issue with the guy pointing out that he went to college. I work at a restaurant for the joy of meeting people and having fun doing so. I attended college AND I graduated at the age of 20 AND it is a well-known university just this Spring, YET I do not point that out whenever I get the chance. Hell, I have TWO degrees if you wanna get technical and shit. But why was it necessary for him to point that out? Maybe I should not take his little statement personally, but I am!

Why do people assume that if someone works in a restaurant that they are not educated or did not complete their education? Even if they didn't, who says it is alright for the next person to look down on them? Does a college degree grant someone the right to be a bitch/asshole? Maybe I should start carrying my degrees around and act like I'm better than everyone who doesn't have one.

In this economy, having ANY job is a blessing. If I had a two Master's Degrees in English and Philosophy, but decided to work as a stripper, it doesn't mean I'm stupid, I'm just personable :)