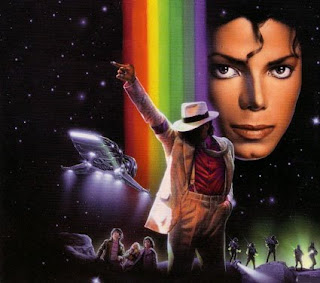 Wow. I cannot believe it. He's actually... Resting. I can't say the "d" word just yet. It hasn't quite hit me yet. But I can say that I am quite grateful that I have gotten the chance to hear his music and walk the Earth at the same time as him, even though I never met him. Regardless of the crazy things said about him, Michael Jackson will always be a music icon. MJ could moonwalk circles around anyone who called him crazy. I bet those same naysayers are the ones who bought the shiny silver highwater pants, the red leather "Thriller" jacket, grabbing their crotches yelling "Ahhhhh!" and singing "Beat It" at the top of their lungs. Michael will always be the Kang (not the king) but the KANG of Pop. (Yes, I went there on y'all) lol
Michael Jackson "The King of Pop" Always in our hearts. 1958-2009
Moon Walk in Paradise (& say hi to 2pac for me lol)
Sincerely,
♥Phoenix
Created by Ms. B. at 11:50 PM