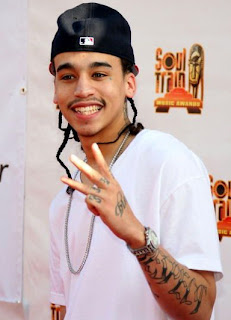 So... Tonight another life was lost. Aspiring rapper Dolla (real name: Roderick Anthony Burton II). Dolla hailed from East Atlanta and Los Angeles, and he was signed to Akon’s Konvict Muzik imprint. The rapper was shot and killed shortly after 3:00 PM near the La Cienga Boulevard entrance, after a fight between a group of individuals broke out.

I do not know much about him, except that he gained much recognition for his song last summer, "Who the Fu*k is That?" Regardless, another life has been taken away over unnecessary fu**ery. Although we have a multiracial President, change has yet to be fully achieved.

My sincerest condolences goes out to his family, especially since he was so young (20/21 years old) and still had his life ahead of him.

Email ThisBlogThis!Share to TwitterShare to FacebookShare to Pinterest
Labels: In Memoriam...